Hit enter to search or ESC to close
24th February 2021 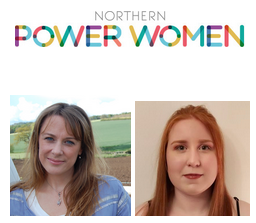 We are incredibly proud to announce that two members of the Young Women’s Film Academy have been shortlisted in the prestigious Northern Power Women (NPW) awards.

For those who don’t know, the Northern Power Women (NPW) is a collaborative movement, founded by Simone Roche MBE, designed to accelerate gender diversity across the North of England. The annual awards, now in their fifth year, is an opportunity to showcase the achievement and change makers in the region and is the country’s largest awards championing gender equality.  So, it is fantastic to see Clara and Amelia both on the list.

Sadly, due to COVID-19 we will miss out on the opportunity to glam up and cheer on our fellow Academy advocates but we will be cheering them on at the virtual awards taking place on Monday 8th March 2021.

Clara Shield, a trustee of Young Women’s Film Academy (YWFA) and one of the founders has been shortlisted in the Transformational Leader category alongside some other truly inspiring individuals.

Clara, Managing Director of Little Big Butterfly, has been working with youth and community groups for over 15 years and has dedicated a significant part of her life to working with young girls and women, encouraging them to explore often challenging issues through creative drama and the medium of film.

Amelia Clark, got involved with YWFA when she joined the Girl Kind project and is now an active member of the team, promoting the film academy.  Amelia made the NPW Future 2020 shortlist that recognises future leaders and celebrates women who use their power and influence in a positive way and have made a significant difference in their communities and organisations.

The Young Women’s Film Academy, a registered charity, is an organisation led by women focused on improving the wellbeing of girls and young women in the region.  The YWFA provides members with the opportunity to acquire film making skills, allowing them to explore and express their feelings on a wide range of topics. Find out more here – https://youngwomensfilmacademy.co.uk/